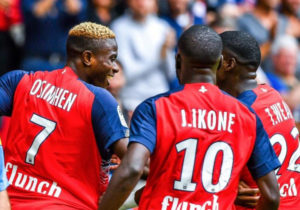 Nigeria striker Victor Osimhen was recently named Lille’s Player of the Month of August, in a period when he was without equal in attack for both club and country.

Following his impressive start to the 2019/20 French Ligue 1 season, the former Sporting Charleroi forward has been named his new club’s Most Valuable Player of the month, just weeks after moving to France from Belgium, reports Soccernet.ng

The 20-year-old has remarkably acclimatized quickly with his new surroundings, taking little time to earn his first start and subsequently his first goals for the Great Danes.

In the month under the review, Victor Osimhenfound the back of the net four times in four Ligue 1 games for Le LOSC.

In a team that has former Chelsea striker Loic Remy, Liberia’s President George Weah’s son, Timo Weahand highly rated, 21-year-old French midfielder Jonathan Ikone – he scored on his international debut in France’s 4-1 victory over Andorra – it’s amazing how it turned out to be a one-horse race to the award

Sincerely, no one else deserved the honour as much as the 2015 World champion.

Osimhen’s four goals accounted for a huge 80 percent of Lille’s total goals scored (5) in August. Jonathan Bamba, from a spot kick, is the only other Lille player with a goal to his name so far this term.

Two games later, the youngster hit another double in their 3-0 home win over Saint-Etienne.

Without the Super Eagles striker’s goals, Les Dogueswould have acquired three fewer points than their current haul and would sit eight places below their present status in 18th on the league table.

In the two other games that Osimhen played in and didn’t score, Lille ended each of the matches with 10 men, following Boubakary Soumare’s 39th minute dismissal away to Amiens and Yusuf Yazici’s 59th minute sending off away to Reims.

On the goal scorer’s chart, no other player in France has bettered Osimhen’s four strikes in as many matches. Not even the more illustrious names of Lyon’s Memphis Depay, PSG’s Edison Cavani, Angel di Maria or Kylian Mbappe.

Although, there’s still a long way to go in this season and a lot of time for this lot to catch up, but not many will bet against the former U-17 World Cup Golden Boot winner adding a few goals to his tally.

Especially exciting is the prospect of Osimhen forging an increasing understanding with the other members of the team’s flying front four alongside Timo Weah, Jonathan Ikone and Jonathan Bamba. That combo in full flow will surely produce plenty of goals as the Ligue 1 season gets into full gear.

Osimhen will continue his hunt for more individual and team honours when Lille host Angers after the international break next Saturday.