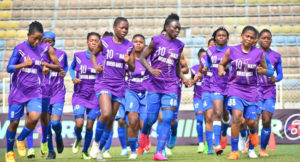 After a catastrophic start to their campaign in the CAF Women's Champions League at the weekend, Nigeria's flag bearers Rivers Angels will hope to make amends in Tuesday's second group game against Mamelodi Sundowns.

The 3-0 defeat suffered against Morocco's ASFAR in their opening fixture means Rivers Angels need nothing but a win in their second group game to keep their hopes alive in this maiden elite club competition for women on the continent.

The 'Jewel of Rivers' as they are fondly called arrived barely 24 hours before their opening game and that impacted negatively on the players in the tie against Morocco's ASFAR.

Now fully rested, Rivers Angels coach, Edwin Okon has promised an improved display against Sundowns who on their part started on a winning note at the CAF Women's Champions League.

Coach Okon, while speaking at the pre-match press conference on Monday, said he is not bothered about the heroics of the South African side from their opening game but focused on getting the best off his ladies

He said: "I think the team has rested now, and we will give it our best".

"It doesn't matter if we watched Mamelodi Sundowns play or not, games change and we just only have to do our maximum efforts."

"We don't want to recall the last match; every player can make mistakes. Every team is good, therefore they are all here with us".

For Jerry Tshabalala - Mamelodi Sundowns coach, he is already anticipating a tough clash against the Nigerian ladies even as the admitted that the heavy loss in the first game is not a true reflection of the strength of the Nigerian representatives.

He said: "Tomorrow's (Tuesday) game is probably the biggest game; we know Rivers Angels are strong, but we see an open way for tomorrow's three points".

"They will use space on the wings, they are a strong team, but we will fight to win the game".

"We are happy they finally arrived; we cannot be deceived by their first match. They can play a very better football".

"ASFAR played a very good game against Rivers Angels, their forward Sanaa Massoudy was very good. But our toughest game now is tomorrow, that's what we need to focus on".

While Rivers Angels are battling to stay on, for the South African .one more win will seal their place in the semi-final.