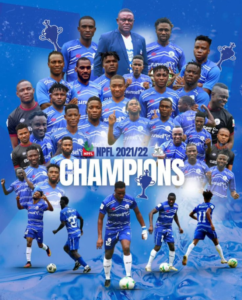 2021/22 NPFL champions, Rivers United are engrossed in preparation for a trip to Spain for preseason training camp in Madrid ahead of their 2023 CAF Champions League, NPFL and Aiteo Cup campaigns,

Eguma’s men were hugely rewarded by a delighted Governor, Barrister Nyesom Ezewo Wike, who gifted each player of the triumphant team $20, 000.

Wike did not stop at that. He approved and announced a two-week preseason camping for the team in Madrid, with program at the Laliga giants, Real Madrid.

The preseason camping in Europe, Wike said during a State reception for the squad, was to adequately prepare the Rivers United for the CAF Champions League campaign next season and promised to reward each of the players with $40,000 if they reach the Group Stage of the continent’s most glamourous interclub competition.

As Rivers United prepare for the Madrid trip, Eguma tells Completesports that they are condemned to match the Governor’s mandate and expectation.

“We’re preparing for the trip to Spain for our preseason training camp,” Eguma told Completesports.com Thursday.

“You Know, it’s said, ‘to whom much is given, much is expected’. We’re grateful to the Governor for motivating the team to victory in the NPFL.

“He made sure we lacked absolutely nothing in terms of welfare and inspiration.

“We’re also eternally happy and grateful to him for the reward he gave the team, players, coaches and officials.

“Above all, he has set the tonic for us to excel in the continent next year by approving a preseason training camp for us in Spain and it’s our utmost ambition to make the most of the opportunity in order to do well in the Champions League and make him happy, as well as the people of the state and Nigerians in general”.

Eguma added: “Right now, we’re engrossed in the preparation for the Spain trip.

“We are pushing for the travel documents, visas. Of course, the trip won’t be this month, July, because it’s already ending.

“I don’t know the specific date yet, but certainly, it will be next month, August, so that we would be back on time to face the continental and domestic challenges”.

On Tuesday, the League Management Company, LMC, organisers of the Nigerian top flight, announced September 24 as the date for the start of 2022/2023 NPFL.