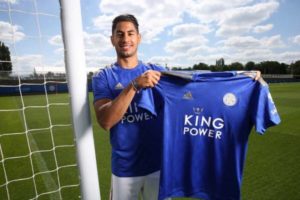 Kelechi Iheanqcho spot in danger as Leicester City sign a new striker Ayoze Perez from Newcastle United for £30m on a four-year deal.

The 25-year-old leaves Saint James’ Park after five years where he made 195 appearances for Magppie, scoring 48 goals, including 13 in 41 games in his final season and he was the club’s top scorer in the 2018-19 campaign.

Perez is a Brendan Rodgers’ second signing of the summer, following the arrival of defender James Justin from Luton Town as he told the Leicester City official website “I’m very happy and very pleased. I’m very proud to be part of the Leicester family and I can’t wait to get started.

“The Club want to keep growing as much as they can and that’s something I like. I spoke with the manager and that was important. That made me feel very comfortable about the decision to come here.”

Leicester City Manager Rodgers added: “I think Ayoze will be a wonderful addition to the squad. He’s quick, has a good eye for goal and he’s experienced in the Premier League too.

“I think he’s a player who will excite our supporters, and his style is one that I believe complements the options and quality that we already have here at the Football Club.”

Pérez will now link up with his new Leicester City team-mates ahead of next week’s training camp in France as they prepare for a new Premier League season.