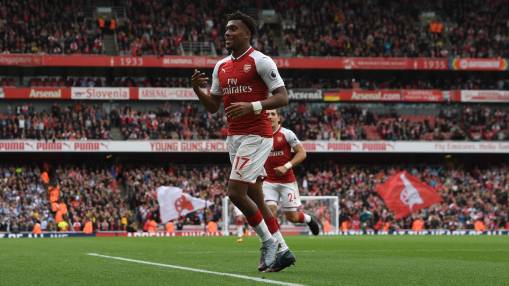 When is an international break not an international break? When the usual dreary procession of non-events is shattered by the sight of teams actually qualifying for a World Cup -- accompanied by an outpouring of emotion and a tableau of joy. One such moment was provided by an Arsenal player.

Tears of happiness were shed in locations as disparate as Egypt, Panama and Iceland, if not exactly England. And in Nigeria, the honour of securing his country's place at the World Cup went to a mere 21-year-old: Alex Iwobi. Twenty-four years after his uncle, Jay-Jay Okocha scored a goal to help take Nigeria to their first ever World Cup, in 1994, Iwobi's strike in a 1-0 win over Zambia took them to their sixth.

It was not a typical contribution: Iwobi may have scored in the 2-0 win over Brighton before the international break but that was his first goal of the season for Arsenal and only his seventh overall. It would hardly be accurate to say he has won over all supporters with his penalty-box prowess. Still, the past fortnight has been very encouraging for a player who had drifted well out of favour by the end of last season.

The switch to a back three by Arsene Wenger was a contributory factor, as Iwobi seemed to lack an obvious role in the new formation, which required two forwards playing off a central striker without a No. 10. But just as influential was a slump in form and confidence, set against the unfortunate backdrop of sniping from some supporters on social media. Admittedly, branding yourself as "Big 17" rings slightly hollow when you've been removed from the frontline and had to briefly drop back down to the youth team.

Arsenal might have finished 2016-17 with renewed vigour, carrying them to the FA Cup final win over Chelsea but Iwobi certainly did not. Still, there has been a noticeable upturn in his prospects of late, starting really with the 0-0 draw away at Chelsea when he stepped in for Mesut Ozil and performed manfully, his more proactive brand of football giving Arsenal's pressing a convincing complexion -- something of a rarity.

Mark Kerton/Action Plus via Getty Images

This week he has grown in stature a little bit more again: assuming a central role in his country's progress to the World Cup, shouldering all the responsibility and embracing the acclaim that entails, will hardly harm his cause at club level.

Two goals, one for Arsenal and one for Nigeria, in such quick succession hint that Iwobi might be ready to take the next step which has been demanded of him by his manager. "What you want from him is the final balls and goals as well," said Wenger after the win against Brighton. "A player like him must score 10 goals [this season] and he must as well give between six and 10 assists. That's what I want of him."

It is a huge challenge. Iwobi says he has worked hard at his finishing -- "People in my position were doing better than me in that aspect of the game, which is to eventually win games, and that's something I had to work on," he told the Evening Standard in September -- but it still requires a lot more finesse and he is liable to scuff a shot or fail to get enough velocity on the ball. It is clear he is not ready to make the kind of goalscoring contribution that Alexis Sanchez does playing off Alexandre Lacazette -- and likely never will. But that is not necessarily what will be expected of him.

It has been rather overlooked that in the first half of last season, Iwobi played very nicely on the left of the attack, offering balance to the side as he cut inside as an additional playmaker while Theo Walcott hared forward from the right. Now he finds himself on the other side of a reconfigured stack, with Sanchez on the opposite flank, but the effect can be similar. He is a player who helps to knit things together rather than always trying to cut teams apart at top speed.

This is what puts him in direct competition with Mesut Ozil and if it is a fight he is unlikely to win in the short-term -- at least when Ozil is fully fit -- he could profit from a vacancy come the summer when Ozil almost certainly leaves on a free transfer. He will not be the only one jockeying for that role: Jack Wilshere's promising early form since his return to fitness has made him a contender too, and who knows if Wenger has reinforcements in mind for January. Resuming an interest in Thomas Lemar and actually signing the Monaco star would certainly complicate matters for the young Nigerian.

But then he is used to a challenge. The incomplete young forward who saw his first-team chances evaporate in the spring and summer had to prove himself all over again. After taking Nigeria to the World Cup, the process is in full swing.