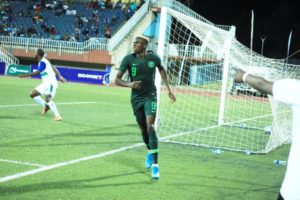 Former Super Eagles forward Odion Ighalo has showered encomium on Victor Osimhen following his superlative showing in Sunday’s 4-2 away win against the Crocodiles of Lesotho, report

Osimhen scored twice and recorded two assists as the Super Eagles rallied back to win the game after conceding early.

The Lille of France forward has now scored four goals in his last four appearance for the three-time African champions.

“I always told him that he has everything it takes to lead this attack, but it all depends on him,” Ighalo told ESPN after the game against Lesotho.

“I told him he has to keep working hard, stay humble and always be ready to learn, and above all not to get carried away with success or hype but just to keep improving.”