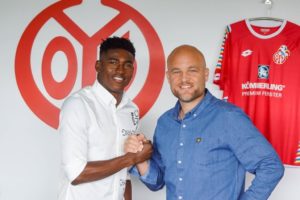 Nigeria forward Taiwo Awoniyi is looking forward to a successful time with German Bundesliga outfit, FSV Mainz after completing his one-year loan transfer to the club from Liverpool, reports Completesports.com.

“I am looking forward to my time at Mainz 05. The talks with those responsible were very good and I was warmly received by all of them here,” Awoniyi told Mainz’s official website following his unveiling on Thursday.

“The Bundesliga is one of the top European leagues and I am grateful that I have the chance to prove myself here. ”

Awoniyi is expected to have his first training session with his new teammates on Thursday (today) afternoon in Bruchweg.

The 21-year-old spent the first half of last season on loan at Belgian club KAA Gent where he struggled to make much impact and failed to register a goal in 16 league appearances.

Awoniyi joined Liverpool in August 2015 for a fee of around £400,000, but is yet to play an official game for the current European champions.

His previous loan spells were with German second-tier club, FSV Frankfurt and Dutch side, NEC Nijmegen.