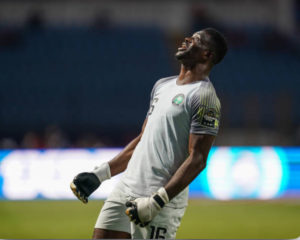 Daniel Akpeyi saved two spot kicks as Kaizer Chiefs punched the ticket for a place in the semi-final of the 2019 Telkom Knockout on Saturday at the Moses Mabhida Stadium.

Chiefs defeated Orlando Pirates 4-2 on penalties in an extended version of the Soweto Derby, after a 2-2 draw in 120 minutes of football and Akpeyi played a crucial role.

The Nigerian was breached in the 35th and 100th minutes as Kaizer Chiefs chase their first silverware of the season.

Victory for Ernst Middendorp’s men came on the day when Siya Kolisi, a Chiefs’ fan, captained South Africa to the Rugby World Cup title in Japan.