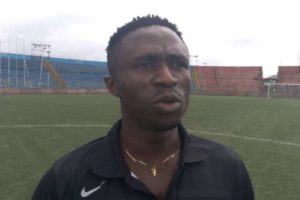 Rivers United captain Austin Festus is looking forward to a difficult encounter when they lock horns against Akwa United in the Federation Cup Cup round of 32.

The two teams will battle for qualification to the next stage of the tournament at the Nnamdi Azikiwe Stadium on Wednesday.

Rivers United romped to a 4-0 victory over Timber-loaders in their previous cup outing and Festus is upbeat that their hunger to secure a ticket for the Caf Confederation Cup will lead them to triumph over the Promise Keepers.

“We are looking forward to this game and we are determined to ensure that we progress to the next round,” Festus told Goal

“We know it will be a 50-50 game but we want to qualify for the continent after about three years absence. We are motivated to win this game and advance to the next round.”