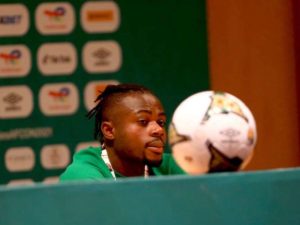 inform Moses Simon has revealed the secret behind his superlative form for the Super Eagles at the 2021 Africa Cup of Nations in Cameroon.

Simon has been one of Nigeria’s top performers at the competition, with a goal and one assist to his name.

The winger has been criticised for his inconsistent performance for the Super Eagles in recent years but seems back to his best at the moment.

“I think the change of play has helped me a lot. With the former coach I played as a wing-back,” the Nantes star told NFF TV.

“Of course, I am grateful for that because he gave me the opportunity to show what I can do. He believes in me. He could play me anywhere I will perform”

“With the current coach, he gave me the freedom, just go and do your thing and defend less.”