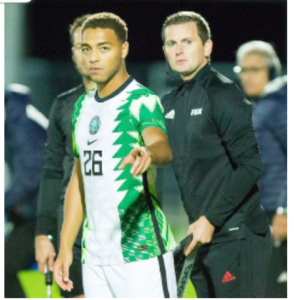 Three strikers called up for the international friendlies against Mexico and Ecuador namely Cyriel Dessers, Victor Mbaoma and Ishaq Rafiu have taken to social media to react to their call-up to the national team.

Salisu Yusuf, who is the Super Eagles first assistant coach, has named three goalkeepers, ten defenders, eight midfielders and nine strikers on the roster for the games taking place in the United States.

Feyenoord striker Dessers has been rewarded for his excellent season, earning a recall to the squad after more than eighteen months in the international wilderness.

Of the 30 players named on the roster, the one-cap Nigeria international has netted the most goals this season (20), and is the top marksman in the Europa Conference League with ten.

Rafiu has been in impressive form for Rivers United in the Nigeria Professional Football League, topping the scoring chart with fourteen strikes, two more than the popular Enyimba frontman Victor Mbaoma .

See what Dessers, Rafiu and Mbaoma posted on Twitter 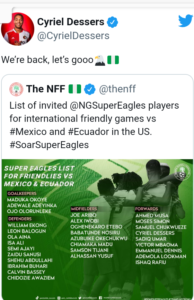 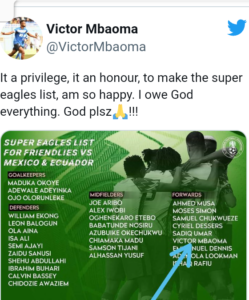 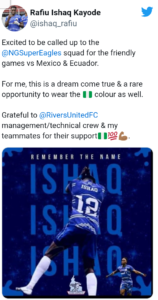