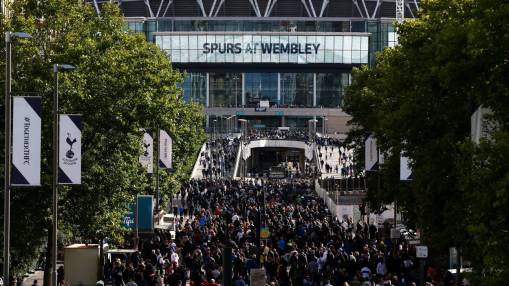 The Exploding Heads head to Wembley to try their wizardry on the stadium, in the hope to lift Spurs' curse. Kasey Keller says talk of a Wembley Stadium curse will subside once Tottenham string together two or three wins in a row. The FC crew discuss Spurs' persisting struggles at Wembley and the differences playing there instead of White Hart Lane.

Tottenham Hotspur could break the 10-year-old Premier League attendance record when they host Bournemouth at Wembley on Saturday.

Club sources have told ESPN FC that ticket sales are progressing well and they are closing in on the previous record of 76,098 -- set when Manchester United beat Blackburn 4-1 at Old Trafford in March 2007.

Spurs came close to the record for the 2-1 defeat to Chelsea in their first league match at Wembley in August, watched by 73,587, when tickets were on restricted general sale.

Saturday's match is on general sale to the public and the club is still yet to make all sections of the national stadium available.

The frustrating home draws against Burnley (67,862) and Swansea (65,366) were also on general sale but attracted fewer than 70,000 supporters, with club sources saying attendances are often low in August and September due to holidays.

Liverpool's visit in the league on Oct. 22 will also be on restricted general sale -- following advice from the safety advisory group, made up of the club, Brent Council and the police, ambulance and fire services -- meaning only Spurs fans with a history of buying from the club will be able to purchase tickets.

Saturday's attendance is unlikely to surpass the club record of 85,512, set at Wembley against Bayer Leverkusen in the Champions League last season, which is also a record attendance for a British club playing a home fixture.

Tottenham are yet to win a Premier League match at their temporary Wembley home.

Spurs have confirmed that Wembley's top tier will be closed for the EFL Cup fourth-round match against West Ham on Oct. 25, so the capacity will be limited to 70,000 for the London derby.

Long-term absentees Erik Lamela and Danny Rose, both of whom featured in full training on Wednesday, could return against the Hammers but club sources told ESPN FC that an early November comeback is more realistic for the pair.

Lamela has not played for nearly 12 months due to hip problems and left-back Rose has been out since January with a knee injury.

Spurs host Real Madrid on Nov. 1 and Crystal Palace four days later before another international break, after which they will visit local rivals Arsenal on Nov. 18.