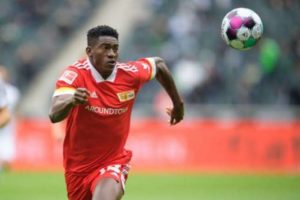 Taiwo Awoniyi was in action as Union Berlin defeated Arminia Bielefeld 1-0 in their Bundesliga clash at the Stadion An der Alten Forsterei on Saturday.

Awoniyi was in action for the 66th minute before he was replaced by Kevin Behrens.

The 24-year-old has scored three goals in six league appearances for Union Berlin this season.

Behrens scored the winning goal for the hosts two minutes from time.

At the Prezero Arena, Kevin Akpoguma featured as a substitute in TSG Hoffenheim’s 3-1 home win against Wolfsburg.

The centre-back has made four league appearances for the club and scored one goal.