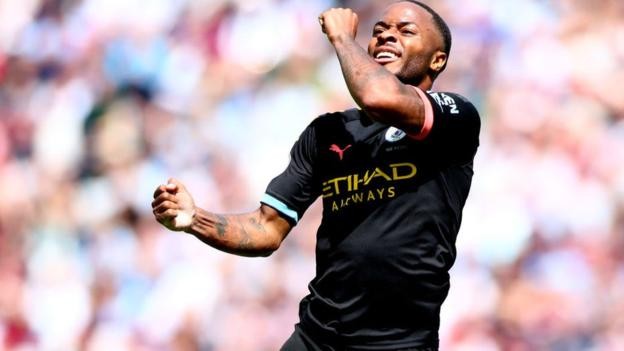 Sterling scored five goals in pre-season and continued that form for the defending champions on Saturday.

Since the summer, Sterling has shone in both a central role and out wide.

"I know the special qualities of the player, the consistency, physicality, the finishing," said Guardiola.

"For the second goal against West Ham the control was not good but the finish good, the third goal was really good.

"He is in his first days playing as a striker but for me striker will be an incredible position for him, but he can play in three positions up front."

Guardiola, though, was keen to emphasise the importance of the whole team performing well together, pointing out that Sterling was not at his best when his team-mates were also underperforming at the start of the game.

"They are incredibly talented players but they need the group. When the team goes forward and makes that step, he plays better."

Rodri was one of seven Manchester City signings this summer

Spain midfielder Rodri made his Premier League debut for Manchester City at the London Stadium and the £63m club record signing impressed with his physicality, touch and range of passing.

"He grew up with the rhythm of the team," said Guardiola.

"He never dismissed that or got sad with what was going on, and again he gave a good performance."

BBC Radio 5 live pundit Pet Nevin is confident Manchester City have a player in Rodri who can become a key part of the team as Guardiola's side look to become only the second side after Manchester United to win the Premier League three times in a row.

"The physicality in Rodri's game was brilliant, his tackles were spot on," said Nevin.

"His touch and passes were fantastic. You don't get into the Man City squad unless your passes and your pass awareness are spot on, but these passes are not on for most players and then he makes the pass, almost inch perfect."