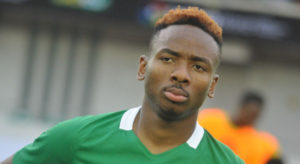 Midfielder Kelechi Nwakali has called for adequate support for the Olympic Eagles ahead of the CAF U-23 African Cup of Nations in Egypt.

Holders Nigeria are paired alongside South Africa, Cote D’Ivoire and Zambia in this year’s edition of the Olympics qualifying tournament.

Only three team will qualify for the Tokyo 2020 Olympics from the eight teams that will participating in the tournament billed to kick off in November.

Nwakali, who was instrumental in the team’s qualification for the tournament, has now called on NFF to support the team adequately.

He also added that the team must prioritize picking the Olympics tickets ahead of defending the competition they won four years ago.

“The Federation should support the team and I believe the coach knows what it at stake and we just have to go to Egypt and pick the ticket.

“Even if we aren’t gonna win the competition, the main thing is to pick the ticket to the Olympics,” The former U-17 Captain said.

While Nigeria will be competing in Group B, host nation Egypt will be up against Ghana, Cameroon and Mali in Group A.