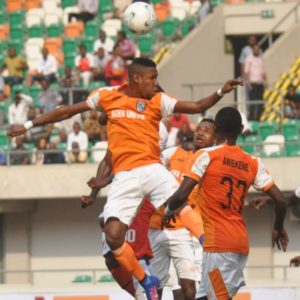 Title chasing Kano Pillars and Nasarawa slipped in their hot pursuit of Akwa United as they both suffered slim away defeats on Sunday, same day the 'Promise Keepers' defeated Enyimba 1-0 in Uyo to open a five-point gap at the top of the table.

In the week 32 matches played yesterday, Akwa United left it late to beat rivals Enyimba 1-0 after Nelson Ogbonoaya upended Mfon Udoh for the resultant penalty that was converted by Charles Atshimene in the 90th minute.

Meanwhile, second placed Nasarawa United fought hard but went down 2-1 at FC IfeanyiUbah after Nonso Nzediegwu opened the scoring in the 28th minute before Chigozie Obasi equalised with his free-kick goal in the 34th minute. However, Uzochukwu Ifejiofor sealed victory for the 'Nnewi millionaires' in the 70th minute.

Although Kano Pillars also fell 1-0 at Sunshine Stars, they remain in third position with 55 points while Enyimba have dropped to fifth place after Rivers United fought back to beat Warri Wolves 2-1 to sneak into top four on the table.

In Aba, Kwara United suffered setback in their title chase as they lost 2-1 to Abia Warriors, Lobi Stars turned back Adamawa United 1-0 in Makurdi, Katsina United continued with their fine run in Lagos where they held MFM to a barren draw while Rangers survived Wikki Tourists' scare to win 2-1 at the 'Cathedral'.

At the Ahmadu Bello stadium, Jigawa Golden Stars also left it late to beat Plateau United 1-0 to keep their hopes of survival alive.

Dakkada FC had recorded a slim 1-0 win over Heartland in the opening match of week 32 on Saturday in Uyo.