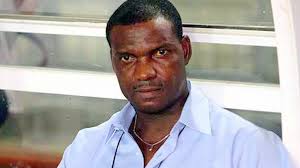 The appointment of a former Super Eagles captain and coach, Augustine Eguavoen, as the Technical Director of the Nigeria Football Federation (NFF) has been commended by Nigerian coaches.

Eguavoen’s elevation into the top position to oversee all technical matters in Nigerian football, was ratified at last Tuesday’s Executive Committee meeting of the country’s highest football governing body.

Eguavoen is a member of the trailblazing Super Eagles set of 1994 that won the AFCON title the same year and earned Nigeria’s first ticket to play in the FIFA World Cup in USA in 1994.

With this new appointment, he is expected to chart the technical direction of Nigerian football, a task that the former defender is all too conversant with having worked as a technical guru all his years in football.

Speaking on Eguavoen’s appointment, a former Super Falcons coach, Godwin Izilein, said it was a step in the right direction, adding that Eguavoen has the requisite wealth of experience to energise the technical arm of Nigerian football for optimum performance.

Izilein described Eguavoen as a person of impeccable character, whose passion for excellence and commitment to the growth of Nigerian football was top notch, tipping him to succeed in his new plum position.

“Eguavoen is a thoroughbred professional who understands technical issues. I see new things beckoning for our football,” said Ogunbote, who most recently, was in charge of Lobi Stars of Makurdi.