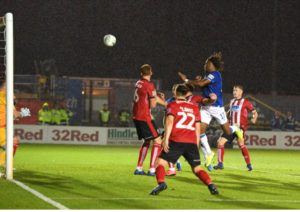 Super Eagles midfielder Alex Iwobi, on Wednesday, opened his goal account in the colours of Everton in their 4-2 win over Lincoln city in the EFL Cup.

Manager Marco Silva handed the Nigerian his first start since joining Everton on deadline day, and the former Arsenal player did not disappoint when it mattered.

With the game tied at 2-2 , Iwobi shot the Toffees into the lead with a close range header in the 81st minute; his first goal for his new club.

Even though it was Richarlison that put the icing on the cake at the Sincil Bank Stadium, Iwobi’s contributions – work rate and goal – were among the highlights of the game.