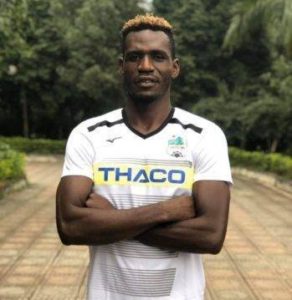 Nigeria Professional Football League (NPFL) side, Shooting are at the verge of acquiring the services of former Akwa United player, Kelly Kester.

It is reported that the deal is edging closer and will be sealed in no distant time.

The NPFL experienced versatile player played in the league for six years, plying his trade at Lobi Stars, Enyimba, Akwa United and briefing with Kano Pillars before moving to Asia.

He had a two-year contract with Pillars in 2019/2020 season, but had to move to quickly to Hoang ANH Gia Lia after the Vietnamese side called. He played just two matches for Pillars.

The free agent will be returning to the Oluyole Warriors after his stint with them in the 2015/2016 season.