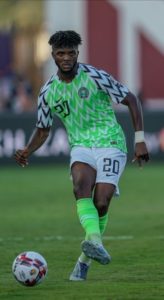 Laliga side Leganes will before the end of this week announce the signing of Chidozie Awaziem from FC Porto on a five year deal,according to  Owngoalnigeria.com

Awaziem was courted by Werder Bremen, Nantes and Istanbul Basaksehir after his impressive performance for Nigeria at the recently concluded 2019 Africa Cup of Nations in Egypt.

The deal will bring an end to his four years stay with FC Porto where he rose through the ranks to the first team but found out it hard to maintain his spot in the team the past three seasons, which made them to loan him out.

He spent the second half of last season on loan to Rizespor after failing to become a mainstay in the team of Porto in the first stanza of last season. Aside Rizespor he also spent time on loan to Nantes two seasons ago.

At Leganes he will reunite with his international teammate in Kenneth Omeruo who made a permanent switch to the team after impressing in his first stint on loan last season.