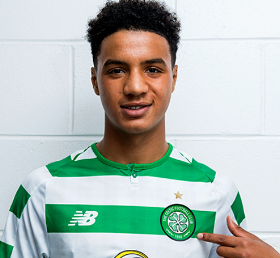 The international future of former Arsenal schoolboy Armstrong Okoflex is up for debate with the English Football Association looking to convince the highly-rated winger to pledge his allegiance to England.

According to the Telegraph, the Football Association are pushing the Celtic youngster to commit his international future to England.

Born in Dublin in March 2002, Okoflex qualifies to represent Nigeria through his parents but the three-time African champions are lagging behind the two European nations in the race for his services.

The attack-minded teenager played non-binding games for England U16 and U17 national teams before becoming provisionally cap-tied to Republic of Ireland in a UEFA EURO U19 Championship qualifier against Switzerland on November 14, 2019.

Regarded as one of the top talents at the Celtic Academy, Okoflex was included in matchday squads for two Scottish Premiership games last season but failed to come off the bench on both occasions.

He will be able to switch allegiances to the Super Eagles until he makes his competitive debut for either England or Republic of Ireland.

Okoflex is on the radar of English clubs ahead of the reopening of the transfer window.