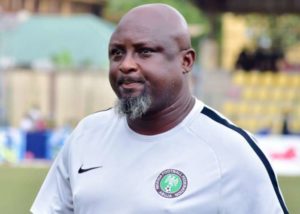 Akwa United FC boss Kennedy Boboye wants his players to rediscover their killer instincts ahead of the Heartland FC game at Dan Anyiam Stadium this weekend.

Last time around, Akwa United missed a lot of scoring opportunities in the 1 – 1 draw against Wikki Tourists in midweek.

The team have picked just six points from a possible fifteen and are yet to record an away win after two attempts.

Boboye has now charged his players to be more clinical in front of goal.

“We have played five matches already and we have observed some lapses in our team,” Boboye said.

“Our ball play is very encouraging all what we need to do is to bury our chances. We can’t afford to gamble with our chances anymore. We can only win matches when we score goals, so we have to make good use of every scoring opportunity.

“We have dropped four points at home already and for us to recover those points, we have to fight for every available point in all our matches.

”I have confidence in my players and I believe we have enough quality in our team to win in Owerri this weekend,” He told club’s website.