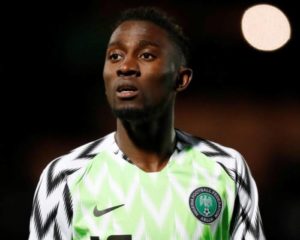 The Leicester City midfielder did not kick a ball in the final months of the season after suffering an injury that had ruled him out since March.

2021/22 was unkind to the Nigerian who made only 18 Premier League starts — his lowest since his first full season in 2017/18 — and was part of the Nigeria side that exited the Africa Cup of Nations at the Round of 16.

Ndidi was plagued by injuries, failing to take part in Leicester’s last 12 league games and participate in their Europa Conference League progress to the semi-finals.

Brendan Rodgers’ side ended the campaign disappointingly in eighth, outside the European places, having struggled for consistency in the league.

Thus, they failed to match the preceding campaigns where they ended just outside the Champions League positions in fifth.

Ndidi has been linked to a number of clubs but nothing concrete, although Manchester United legend Paul Scholes believes the former Genk man should be the Red Devils’ main defensive midfield target.

“Leicester’s Wilfred [Ndidi] still very much fits the bill of what Manchester United are looking for, and with just two years remaining on his contract at Leicester, it’s likely to cost significantly less than the eye-watering sums associated with him in summer past,” the 47-year-old pundit told Football Daily YouTube channel at the start of June.

“While he missed the last two months of the season with a knee injury, he remains one of the best defensive midfielders in the game when fit.”

Whether Erik ten Hag sees the 25-year-old as a right fit for his Manchester United rebuild, however, remains to be seen.

Without a doubt staying healthy after the recent campaigns laden with injury.

Ndidi had missed five league games in 2019/20 and was absent for 11 in the following campaign and there was optimism that it would not get worse. However, it did worsen in 21/22.

Avoiding any lengthy layoff in the upcoming season will be the number one priority for a player who started 70 games from an available 76 for the Foxes before the ill fortunes of the last three seasons.

The Foxes and Nigeria are stronger units with the top anchorman in their XI, and both sides await his return with bated breath.

Both Leicester City, Nigeria and potential buyers will be hoping the 25-year old defensive midfielder will be back to fitness and back to his best as soon as possible.