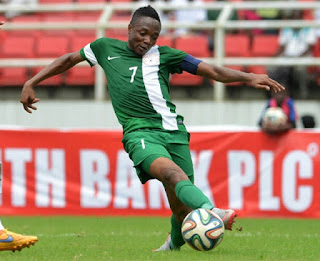 Super Eagles skipper Ahmed Musa was the hero in the Moscow derby as he scored the only goal in CSKA’s 1-0 win against Spartak Moscow in the Russian league on Sunday. Musa scored in the 11th minute to give CSKA the win against their city rivals.

The goal is Musa’s seventh in 19 league appearances this season.

His Nigerian team-mate Aaron Samuel was an unused substitute in the game.

In Germany, Super Eagles defender Leon Balogun and his side Mainz could not replicate their winning feat against Bayern Munich as they were held to a 0-0 draw by Darmstadt.

Balogun, who has been a regular for Mainz this season, was in action for 90 minutes.

Ogenyi Onazi was overlooked for selection in Lazio’s 1-1 away draw against Torino in a Serie A clash.

While Onazi was left on the bench for 90 minutes, Joel Obi was introduced in the 86th minute for Guiseppe Vives.

In La Liga, Success Isaac featured for 90 minutes but couldn’t prevent his side from losing 2-0 away to Real Betis.

Isaac was yellow carded in the 47th minute.