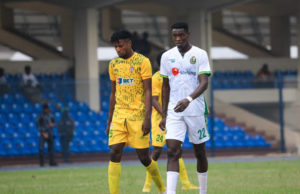 Despite starting the league on fire winning their first three games, Bendel Insurance striker Imade Osarenkhoe has maintain that their target for the season is to remain is to maintain their NPFL status for next season, Nigeriasoccernet.com gathered.

The in-form striker who has three goals already to be his credit this season also refutes stories that his eyes are on the top scorer award.

"I'm not targeting the highest goal scorer because our main priority this season is to remain in the top-flight and we are still focussing on that," he said in a short video on Twitter.

During the game, I lost a chance and I was not happy with myself but I'm still a work in progress and I will take the game as they come."

Imade scored the only goal as Bendel Insurance recorded their second away victory on the road at Adamasingba against Kwara United.