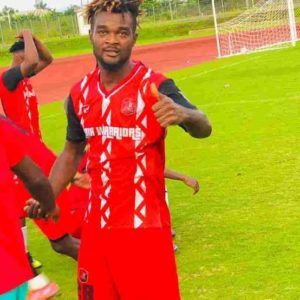 According to multiple reports, Enyimba are in talks with Abia Warriors forward Valentine Udoh as a possible replacement for their striker Victor Mboma, Nigeriasoccernet.com gathered.

Victor Mboma is likely to ditch the two times CAF Champions League winners for a deal abroad, however Enyimba has switched attention to city rival Abia Warriors who escaped relegation for their talisman from the 2021/22 NPFL season.

Valentine Udoh was Abia Warriors highest scorer in the concluded season, notching 11 goals in all competitions as they beat the drop.