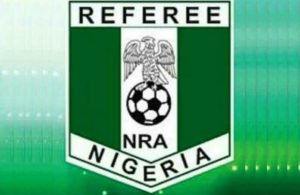 After a review of their performances of match day 3, the referees'committee have placed a 3-match suspension on three Nigeria Premier Football League, NPFL referees.

A release "notice of suspension" the secretary of the committee, Sani Zubairu announced the suspension of referees.

"The following Referees are hereby suspended until they appear before the Referee's Committee for explanation on what happened in their matches they were involved as follows: -