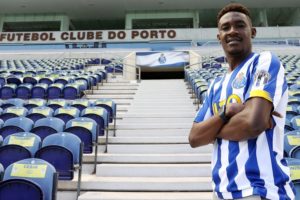 With the transfer window in full flow, Nigerian left-back Zaidu Sanusi has been linked to Brighton as a replacement for Spanish left-back Marc Cucurella who is attracting interest from Manchester City and Chelsea.

However, will the Porto star be an adequate replacement for Cucurella?

He is quite capable of playing as an advanced number eight and can invert at any time as an extra midfielder or as an extra centre-back.

He is also a very effective crosser and completes a high number of crosses.

After an outstanding debut season in the Primeira Liga with Santa Clara, Zaidu Sanusi was acquired for four million euros as a backup for Alex Telles, but since the Brazilian departed for Manchester United, Sanusi has subsequently established himself in the team.

The defensive side of his game is already very refined for a 25-year old and he has mastered the art of tackling hard without fouling.

Sanusi's defensive awareness is top-class as well which allows him to anticipate dangerous situations quickly before they happen.

Blessed with height, speed, stamina and strength, Zaidu has the ability to invert in alongside the centre-backs to form a back three like Cucurella.

That flexibility is one of the many reasons Zaidu has become a key player for Porto but his lack of end product in attacking zones can be quite frustrating.

While Sanusi is more physically intimidating than Cucurella, he is not on the same level technique-wise as the Spaniard.

If Sanusi eventually replaces Cucurella, Brighton would have to sacrifice some technical proficiency but would gain more athleticism and physicality in the process.

All in all, the Nigerian is a good replacement for Cucurella as he would increase his technical efficiency under Graham Potter who is one of the best in the Premier League.