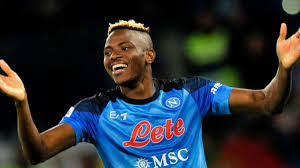 There have been fears in Naples since the Italy's football federation (FIGC) docked 15 points from Juventus following an investigation into the club's past transfer.

Prosecutor Francesco De Falco, working alongside Assistant Prosecutor Sergio Amato, believes that Napoli may have produced false communications in their financial statements for July 2020 to June 2021, based on that Osimhen transfer from Lille.

Napoli reportedly paid Lille around €70m for Osimhen, but €20m from that fee was based on the values of a number of players who the Partenopei added to the deal.

Some Partenopei fans are worried their club could be in a similar problem as Juve, but Aurelio De Laurentiis’ criminal lawyer insists the cases are not similar.

“The Osimhen case I don’t think can be compared to the Juventus case, Napoli didn’t do business with Juventus so they are not involved. If no new elements emerge everything should end well.

“An extension has been requested in order to study the material acquired, it takes the necessary time to judge the documents acquired.

“I cannot even know what the object of the verifications is, the investigations are secret, but the outlook is that the deal took place in a fair manner without falsification of the balance sheets.”