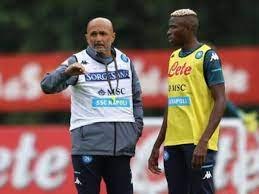 Former Nigerian midfielder Christian Obodo has discussed reasons why forward Victor Osimhen should stay at Napoli ahead of the new campaign.

The 23-year-old Nigeria International, Victor Osimhen is currently a transfer subject of top European clubs after his impressive display for the Partenopei, which saw them finish the last Serie A campaign in third position with 79 points from 38 matches.

Premier League clubs Arsenal, Manchester United, and Newcastle United have been named as a possible destination for the former Lille forward but according to the 38-year-old Obodo, who played for a host of clubs in Italy, Osimhen can only grow for the better at Napoli.

“I’ve been aware of Osimhen’s potential even before he joined Napoli,” Obodo told 1 Station Radio as quoted by Punch. “I think Napoli is the ideal place for a player like Victor in addition to the adequacy of the coach.”

“[Luciano] Spalletti’s work is relevant to his growth and that has allowed him to grow a lot both at Napoli and with the national team,” Obodo continued adding: “I have no doubt about the impact that the former Lille striker would have on Napoli.”

Last season, despite suffering a facial injury that kept him out of action for two weeks, Osimhen managed 27 appearances overall in the top-flight and accumulated 1,992 minutes of playing time. He was selected in the starting XI in 23 of these appearances across their 38 fixtures and entered as a substitute on four occasions.

He was ranked joint eighth in the Serie A goalscoring charts with a total of 14 goals, as well as being the team's top league scorer and chipping in with two assists. He also netted four goals in the Europa League campaign.

A week ago, he was the star player for Nigeria as they kicked off their 2023 Africa Cup of Nations qualification campaign with wins – 2-1 against Sierra Leone and 10-0 against Sao Tome and Principe.

Osimhen scored in their opener against Leone Stars and notched four goals in the thrashing of Sao Tome.