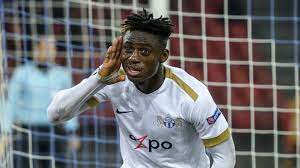 Scottish Premiership giants Celtic and Rangers are mulling over a move for Nigeria international Stephen Odey in the summer transfer window.

The former Mountain of Fire star has put himself in the shop window on the back of his form for Randers last season, with a goal involvement of fifteen (13 goals, 2 assists) in 32 all-competition appearances.

Celtic have approached Randers about the possibility of signing Odey and asked about their price tag for the 24-year-old, but the Hoops have not yet submitted a bid as of now.

The interest from Rangers is believed to be more concrete as it is confirmed that preliminary talks have been held with Sporting Director Ross Wilson.

Rangers have identified Odey as one of the attacking targets in the event Alfredo Morelos departs the Ibrox Stadium in the summer.

The Colombia national teamer continues to be linked with a departure, with his contract set to expire next summer, and Rangers are aware he could sign a preliminary contract with any of his suitors in January.

Randers are demanding a fee of four million euros (N1.75 billion in Nigerian currency) from clubs interested in Odey and recently rejected a bid of three million euros plus add-ons from an unnamed Belgian Pro League club.

It looks like Rangers have lined up the 24-year-old as a replacement for Alfredo Morelos in case the Colombian leaves this summer.

There still is no clarity over his future, especially due to the fact that Gers like to conduct their contract dealings quietly and have cut down on the leaks recently.

In case he leaves, it seems that Odey will be the player walking through the door and Wilson has already touched base to sign him.

The SPFL is arguably a tougher league to play in and he will also need to shine on the European stage with more competitive clubs.

However, if Wilson has entered talks to sign him then the club probably must have scouted him extensively and Giovanni van Bronckhorst too would have given his thumbs up to go ahead with it in case Morelos leaves.