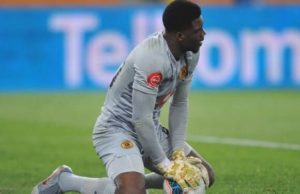 Super Eagles goalkeeper Daniel Akpeyi was in action as Kaizer Chiefs’ unbeaten run in the Dstv Premiership came to an end after a narrow 1-0 defeat away to Royal AM.

The Nigerian goalie made his 10th appearance between the sticks for his South African side this season and was hoping to make it two consecutive clean sheets.

However, he and his teammates were up against a Royal AM side that had not lost any of their last seven home games.

The game started with both sides trying to cancel each other. Kaizer Chiefs recorded two shots on target, but none penetrated Royal AM goalkeeper Hugo Nyame.

However, in the 38th minute, tragedy struck for Akpeyi’s side, as poor defending from captain Bernard Parker ensured that Akpeyi would have a date with Victor Letsoala in the penalty box.

Letsoala didn’t take any prisoners as he finished with a plum beating a helpless Akpeyi.

The goal ensured Kaizer Chiefs went into halftime with a goal deficit.

Stuart Baxter’s men approached the second half with urgency, but they could not penetrate their opponents’ defence as Royal AM maintained an impenetrable shape.

It ended 1-0 at the Dr Petrus Molemela Stadium, and Akpeyi’s side would have to lick their wound after their five-game unbeaten run was brought to an end.

Akpeyi still has one game left to play on the 22nd against Maritzburg before he joins up with the Super Eagles ahead of the Africa Cup of Nations.