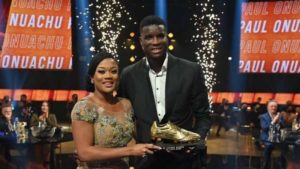 Nigeria’s forward Paul Onuachu, who stars for Racing Genk in Belgium’s top football division, has been recognised for his record-breaking goal-scoring season with the Belgian outfit.

Onuachu got the Belgium division golden shoe award on January 12, 2022, for the 29 goals the Super Eagles’ striker registered in the Jupiter Pro League, as the top flight division is officially referred.

With 29 goals for Genk, Onuachu bested the closest competition Noa Noëll Lang and Charles De Ketelaere, the Dutch professional footballers who play for rival side Club Brugge. His goals were also crucial in the team’s second-place finish in the championship race of the 2020/2021 campaign.

In response to Onuachu’s triumph, Genk issued the following statement: “After Branko Strupar and Wesley Sonck, Paul Onuachu is the third KRC Genk player to win the Golden Shoe. Our Nigerian striker finished ahead of Club players Noa Lang and Charles De Ketelaere.

“2021 was an incredible year for Paul: he became top scorer, won the Belgian Cup, became vice-champion, and was crowned professional footballer of the year. Now the Golden Shoe is added. A legend, our legend. That needs no further explanation.”

Last season, Onuachu’s blistering form for Genk drew interest from a number of prominent European clubs. He stayed put and signed a contract extension with the Belgian club, when a dream move did not materialise.

Unfortunately, an opportunity to shine in the TotalEnergies 2021 Africa Cup of Nations (AFCON) was blown off after Onuachu had to be left out of the Super Eagles’ squad for the continental tournament in Cameroon due to injury.