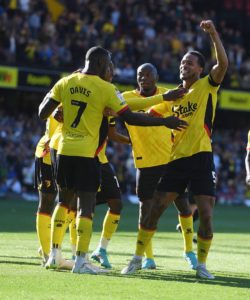 Super Eagles defender, Williams Troost Ekong has called on his teammates at Watford to be effective in holding on when in the lead.

The Nigeria football team vice captain was reacting to the outcome of Watford game against Sunderland at the weekend.

Watford and Sunderland played out a 2 all draw and Ekong felt Watford would have gotten a better result from the match.

“We were better Saturday and need to find ways of killing such games,” he told Watford Observer.

Watford led on two occasions and could have held on any of these occasions, but were pegged back. An incident of lack of concentration according to Ekong.

“I haven’t seen the goals back. There was a discussion over whether their first was over the line but the referee has a watch, so we need to trust that. That’s part and parcel of the Championship without VAR.

“Things can swing both ways, but a lapse in concentration created the chance for them. Those are crucial moments. If we went in 1-0 up we could be a bit more confident.

“We managed to get ahead again and we need to find a way to hold on.”

The former Udinese defender urged the team to be more clinical.

“You can’t guarantee wins but we gave everything. We need to find a way to be a bit cleverer. We looked much better. We dominated spells and tried to play football.”

The match against Sunderland was Ekong's first start of the season and second match this season.