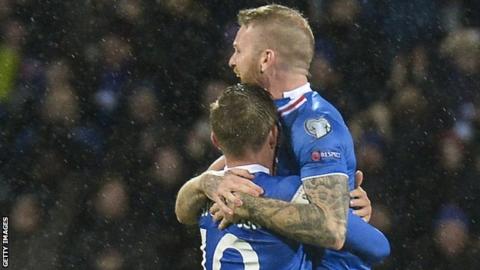 Warnock was worried about Gunnarsson's fitness before Iceland's qualifiers with Turkey and Kosovo.

The 28-year-old played in both ties and films of him joining in the country's celebrations emerged on social media.

Warnock joked: "He should be available, but we have not breathalysed him yet."

Championship leaders Cardiff are also waiting to assess defender Bruno Ecoule Manga, who was part of the Gabon team hit by an outbreak of sickness in Morocco.

Philippines goalkeeper Neil Etheridge is also due to return from international duty.

Gunnarsson completed light training on Wednesday and, although Warnock had warned Iceland beforehand over his fitness, the Cardiff manager struck a more conciliatory tone on Thursday given the circumstances.

"I was disappointed. I said to Kevin Blackwell and Ronnie Jepson [Warnock's assistants], Turkey was the biggest game, he did not want to let them down," Warnock said.

"He played 64 minutes or something like that and the second game the same. I was slightly disappointed they were 2-0 up against a team that had one point in the competition that he didn't come off at half-time.

"But as Jepson and Blacky said, 'It's the biggest game in their history, he's the captain, would you?' I see their point of view really.

Warnock added: "If there's any doubt about him, we won't play him."

Loan midfielder Craig Bryson is available again after being ineligible to face his parent club Derby County in Cardiff's goalless draw before the international break.

Warnock believes his squad will be refreshed and sees the matches before November's internationals as key indicators for the rest of Cardiff's campaign.

He said: "The next five games will decide a lot in our season, really. We have another international break then and I think after 15 games you are well down the road, you have an idea of what you have.

"I always said to our lot originally that if we can be in the top six by the end of October and top 10 by January I would be quite happy, because I think we would have a chance of the play-offs.

"But where we are now is all credit to the boys. So if we can stay in that top area after the next five games I'll be delighted."