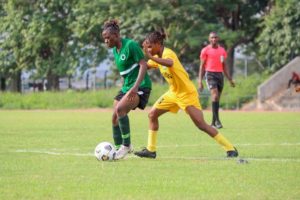 As part of their preparations for the coming Women Africa Cup of Nations in Morocco, the Super Falcons of Nigeria on Thursday afternoon played Nigeria Women Football League club side, Naija Ratels at the Moshood Abiola training pitch, Nigeriasoccernet can report.

The game ended 2-1 in favour of the Falcons with Francisca Ordega and Gift Atule scoring Super Falcons goals.

The Falcons will open their WAFCON campaign against debutante Botswana with their eyes on a record tenth title as well as a ticket to next year's world cup in New Zealand.