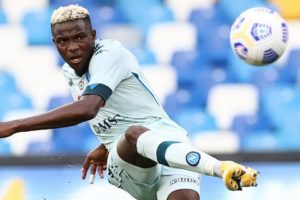 Serie A club Napoli have announced Victor Osimhen has recovered from coronavirus.

Osimhen, 22, is also expected to start individual training on Saturday following a shoulder injury according to Sky Sport Italia.

The forward tested positive for COVID-19 upon his return from Christmas holiday.

Napoli confirmed that the Nigeria international received a negative result from the last swab test.

“Victor #Osimhen has recovered from #COVID19 💪, “reads a tweet on the club’s official Twitter handle on Friday.

The former Lille of France striker dislocated his shoulder while on international duty with Nigeria in November 2020.

Osimhen has not played for Napoli since he scored the winning goal against Bologna on November 8, 2020.

He has scored twice in eight league appearances for the Partenopei this season.