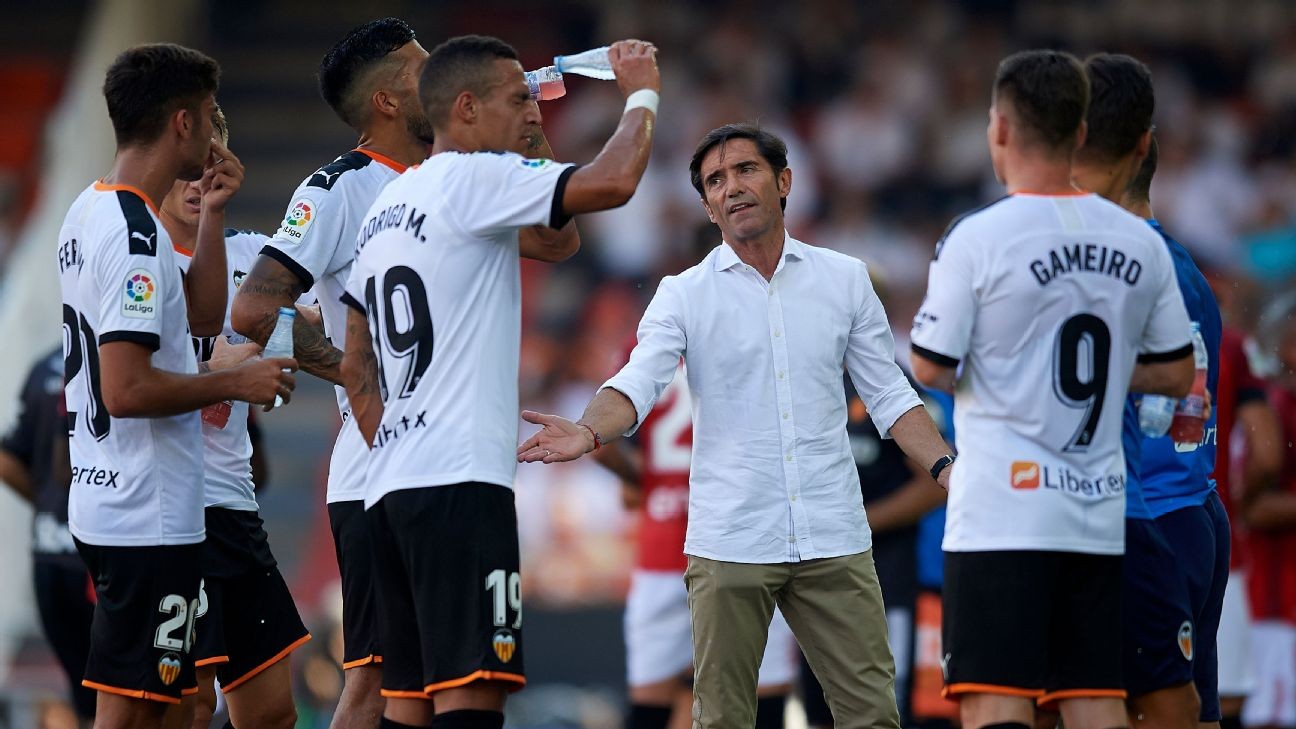 Valencia players were upset by the decision to fire Marcelino.

Valencia players are on a self-imposed silence heading into Tuesday's Champions League opener at Chelsea as a sign of protest over the sacking of coach Marcelino.

Marcelino was dismissed last week despite winning the Copa del Rey and securing Champions League football last season, a decision that was not welcomed by the players nor the fans.

New Valencia coach Albert Celades was the only club member to speak to the media after Saturday's 5-2 league defeat to Barcelona, with the players boycotting the media, including official TV La Liga broadcasters, at Camp Nou.

Valencia confirmed on Monday to ESPN FC that only Celades will speak in the Champions League pregame news conference ahead of the encounter at Stamford Bridge.

The club, however, did not confirm why no player will take part.

UEFA rules state that "each press conference must be attended by the head coach of the team and at least one player."

Valencia-based Las Provincias newspaper report that Los Che have notified the players that it will be them and not the club to pay the fines given for their media silence.

La Liga reportedly fines clubs €1,000 each time one fails to comply with the interviews scheduled.

Valencia urged unity heading into Tuesday's game and issued a statement after the defeat to Barcelona which said: "We have suffered but we must unite those that love Valencia CF. Without fights, nor distractions that only aim to hurt us. It's what there is. We need to close ranks and defend Valencia CF. Without ever looking back."

Valencia players voiced their anger at Marcelino's sacking last week on social media, with Valencia defender Ezequiel Garay clearly stating the club's move "was not fair," while captain Dani Parejo hinted on Twitter that Marcelino had not been allowed "to do his job" at Valencia.

Marcelino said in a farewell news conference last week that he was "absolutely certain" that winning the Copa del Rey last season triggered his sacking.

According to Marcelino, who spent two campaigns at the helm of Los Che, the club wanted the team to focus on La Liga and not on the Copa.

Valencia beat La Liga champions Barcelona 2-1 in Seville on May 26 to lift the Copa while they finished fourth in La Liga despite a slow start to the 2018-19 campaign.