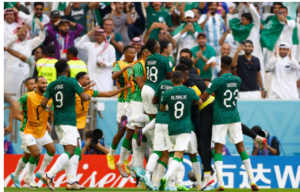 Saudi Arabia created the first major upset of the Qatar 2022 FIFA World Cup by coming from behind to defeat Argentina 2-1 in their opening group game on Tuesday.

Two quick fire goals from Saleh Al-Shehri and Salem Al Dawsari in the second half cancelled out Lionel Messi’s first half penalty to hand victory to Saudi Arabia.

Al Hilal forward Odion Ighalo was at the Lusail Stadium and took to social media to celebrate with the winning team. Meanwhile, Ahmed Musa who once plied his trade with Al Nasr in the Saudi Arabia Professional League, congratulated the Green Falcons fans for the success of their NT.