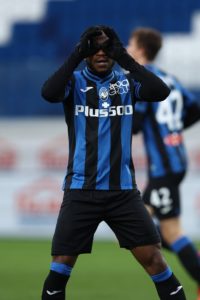 Super Eagles winger Ademola Lookman has been recognized for his outstanding display in the last round of matches in the Italian Serie A, with celebrated football statistics website Whoscored.com naming him in the division's Team of the Week.

In one of the games of the season so far, the Charlton Athletic academy product netted a brace for the third game on the bounce in all competitions as Atalanta and Juventus shared the spoils with a 3-3 draw at the Allianz Stadium in Turin on Sunday night.

Lookman's scoring run continued inside five minutes, breaking the deadlock with a powerful right-footed shot that goalkeeper Wojciech Szczesny let slip through his hands and into the net.

The 25-year-old was also involved in Atalanta's second goal, setting up Joakim Maehle with only 30 seconds gone in the second half, before making it 3-2 with a rare headed goal in the 53rd minute. 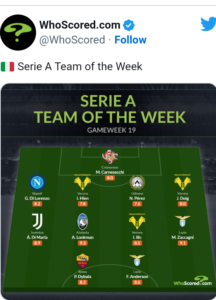 In a 4-4-2 formation, Lookman was deployed in the center of midfield and was awarded a rating of 9.3 - the best rated player named to the Team of the Week.

Against Juventus, Lookman registered a joint-game high three shots and three take-ons, made a team-high three key passes, was the most fouled player on the pitch (3) and completed 86.7 percent of his passes.

Lookman has eleven league goals this season, putting him second in the Italian Serie A scoring charts behind only Victor Osimhen's thirteen goals for Napoli.