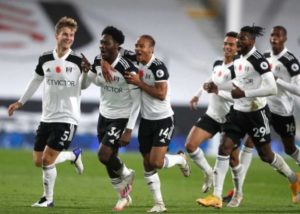 Nigerian international Ola Aina’s wonder strike for relegated Fulham against West Bromwich Albion, is in contention for the Premier League’s 2020/21 Goal of the Season award.

Aina is one of nine players who were shortlisted for the award.

The vicious hit from Aina on his weaker foot claimed the Premier League’s monthly prize for November, and is now in contention for the annual trophy.

Aina was on loan to Fulham from Serie A club Torino.

The winner of the Goal of the Season will be decided by fans vote which will be combined with those of a panel of football experts to decide who comes out tops.

Voting is open from now until 6pm on Thursday and the winner will be announced this week.