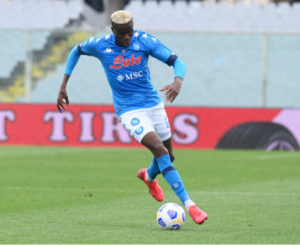 Napoli, inspired by a brace from Nigerian striker Victor Osimhen, showed impressive signs of their progress under new manager Luciano Spalletti by thrashing German giants Bayern Munich this past weekend.

In a pre-season friendly played at the Allianz Arena in Munich, the Neapolitans claimed the lead through Osimhen on 69 minutes, before the Super Eagles star added a second shortly thereafter.

The emphatic 3-0 score line was completed five minutes before the end of regulation time by Frenchman Zinedine Machach.

It may only have been a pre-season clash, but overcoming a Bayern team featuring the likes of Leroy Sane, Serge Gnabry, Kingsley Coman, Leon Goretzka and Robert Lewandowski is a major confidence boost for Napoli.

“I am satisfied with the performance, we are on the right track,” manager Spalletti was quoted by Football Italia.

“The fundamental thing today was to get minutes in our legs. We had to give the idea of an organised team, and I think we achieved that.

“The goals then gave us more confidence in our capabilities. There’s a lot of work still to be done, but we’re going the right way and everyone has exceeded my expectations so far.”

Napoli, with Osimhen as their spearhead and Senegal’s Kalidou Koulibaly as their key defender, will open their Serie Acampaign with a home clash against Venezia on Sunday 22 August.