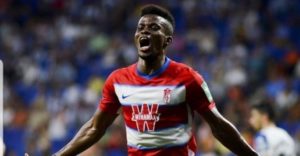 The chances of Nigeria World Cup 2014 midfielder Ramon Azeez playing for the Super Eagles once again has received a huge boost following his goal for Granada last weekend in the Spanish Laliga, Owngoalnigeria.com understands

Azeez who grew through the ranks by representing Nigeria at U17 and 20 level before making the step up to the Super Eagles where he has four caps have not been called up to the team since 2014 but all that will likely change soon.

Coach of the Super Eagles of Nigeria Gernot Rohr watched him over the weekend and was impressed with his performance against Espanyol which he capped with a well taken goal to help his team to a 3-0 win.

Although he only played for 34 minutes, Rohr was impressed with what he saw and sources close to the coach revealed Azeez will likely get his chance when next the team converge which will be in October for the next round of international matches.

Between then and now the coach will scout him further to determine where he best suit into his team as he bid to have more options in midfield following the international retirement of captain John Obi Mikel from the senior national team of Nigeria.