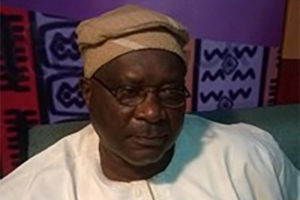 Ex 3sc Boss, Elder Bode Oyewole, died on Tuesday at the University College Hospital, Ibadan  at the age of 67 years.

According to report the Accident and Emergency (A&E) Unit of the UCH, that Elder Oyewole, was brought in breathless in the early hours of Tuesday morning.

The source at the A & E Unit added that “Bode Oyewole, 67, was brought in breathless to the UCH at the early hours of this (Tuesday) morning. He had a medical history of being diabetic and hypertensive.”

Oyewole’s tenure at the Shooting Stars saw the former continental champions achieve a double by winning the 1998 National League title and the WAFU Cup.

Just three months ago, Oyewole wrote Oyo state government to redeem the cash pledge (N1m to each of the players and N2m to each of the club officials and N3m to Oyewole) and a plot of land for each member of the title-winning team.

Media Officer, Tosin Omojola wrote: ”We are shocked and deeply touched by the death of Elder Oyewole, who was the club’s chairman when the team won the league in 1998. He also led the team to the Champions League competition the following year.

“No doubt, it is a great loss to the entire football fraternity, in particular the Shooting Stars, which he served as chairman on two different occasions.

“He would be greatly missed by every lover of this club but his achievement will remain indelible.”

Also, Nigeria Union of Journalists (NUJ), Oyo State council has expressed shock at the death of the late veteran journalist.

“The news of his demise came at a time when his wise counsel, experience and charismatic attributes as a father figure in NUJ and the society in general were much needed,” Oyo NUJ said in a statement.