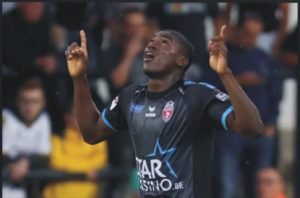 Three Nigerian international, Victor Osimhen, Taiwo Awoniyi, and Samuel Chukwueze were on target for their respective teams in Sunday’s league games across Europe.

Osimhen scored his 11th league goal of the season from the spot for ten-man Sporting Charleroi who came from a goal down to beat Royal Antwerp 2-1 in the Belgium Pro Division League.

The 20-year-old restored parity for Sporting Charleroi seven minutes after Amara Baby had shot the hosts, into the lead in the 24th minute. Massimo Bruno secured the win with 18 minutes left to play.

The game was his 24th of the season for Sporting Charleroi.

At the Stade Le Canonnier, Taiwo Awoniyi scored his seventh league goal in eight appearances for nine-man Royal Excel Mouscron who were held to a 1-1 draw at home to St.Truiden.

He was replaced in the 75th minute for Frantzdy Pierrot.

In Spain, Samuel Chukwueze scored his third Spanish La Liga goal of the season for Villarreal who beat Moses Simon’s Levante 2-0 in a La Liga clash on Sunday.

Chukwueze came on for Gerard Moreno in the 69th minute of the game to seal his side’s fifth win of the season in additional time.

The game was his 16th La Liga appearance of the season for Villarreal. Meanwhile, Simon starred from start to finish in the encounter as a wing back in the defeat.

In Italy, Ola Aina shrugged off his injury worries to replace Lorenzo De Silvestri in the 69th minute of Torino’s 2-1 away win over Frosinone. The game was Aina’s 23rd of the season.

In Swiss League, Blessing Eleke bagged 13th goal of the campaign for Luzern who beat ST Gallen 1879 3-0 on Sunday. Eleke wrapped his side’s 10th league win of the season in the 85th minute of the encounter.

The game was his 29th of the season across all competition.

Also in Switzerland, Stephen Odey played for 80 minutes before he was replaced for Lavdim Zumberi in FC Zurich’s 2-2 draw away at Thun.

Odey who has scored eight league goals this season has gone five games without finding the back of the net.

In Turkey, the trio of Chidozie Awaziem, Okechukwu Azubuike and Aminu Umar powered Rizespor to a 3-0 home win over Kayserispor.

While the duo of Awaziem and Azubuike starred for the entire duration of the game Umar was subbed off for Marwane Saadane in the 75th minute.