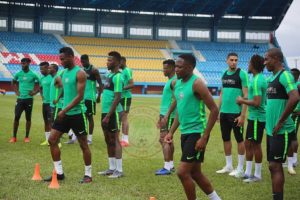 Gernot Rohr has stated that the Super Eagles have experienced and young players whose blend can become a winning team at the 2019 Africa Cup of Nations and meet the expectation to millions of Nigerians back home when the tournament ends on July 19, Completesports.com reports.

The Franco-German tactician is also looking forward to all of his players appearing fit for the Nigerian national team at the continental tourney which starts on Friday, June 21.

Nigeria will be making a return to the biennial competition after a six-year hiatus which saw them missing the last two editions in 2015 and 2017, but the West Africans are one of the favorites to win in Egypt.

“Reaching the final stages requires a number of things and we are now focusing on the opening game against Burundi,” Rohr said in a press statement.

Our main goal is to reach the Golden Square at the very least because Nigeria has before the tournament a very good ranking in terms of international level.

“Nigeria have a mixture of experience and young players who have the will and determination to achieve the goals of the technical staff and the aspirations of the Nigerian public.

Rohr, however, admits that the team is missing Tyronne Ebuehi.

“The team is missing a strong player, Tyronne Ebuhei who has been injured for a number of months,” he said of the defender’s absence.

“It is solvable, though, as the team has a young guard and two other goalkeepers with good experience and they showed up well during the last friendly against Senegal.”

Rohr also spoke well of 20-year-old Samuel Chukwueze who plays for Spanish side, Villareal, saying the attacker will be one of his surprises.

“The match against Senegal was good, the team did not appear to be at their best because some players were stressed, but despite that, the team showed up well and it was a good test on a good pitch.”

Rohr stressed that his focus is on the first game which is always the most importan.

He said: “We have to be ready for it and everything in the team camp is going well,” Rohr said.