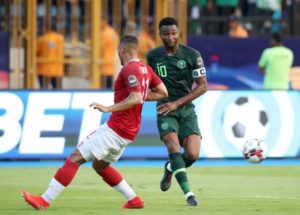 Super Eagles head coach Gernot Rohr believes his side can still win a fourth Africa Cup of Nations title despite their shocking 2-0 loss to the Barea of Madagascar in their last Group B match at the Alexandria Stadium on Sunday, reports Completesports.com.

The West Africans who are already through to the Round of 16 after winning their opening two games against Burundi and Guinea, put up a shambolic display against the debutants.

It was the first time Madagascar recorded a win against Nigeria in five meetings.

Despite the setback, Rohr who made five changes to his starting lineup is adamant that the Super Eagles can still conquer the rest of the continent.

I’m still confident that we can win the competition because we have our injured players back. Ighalo and Musa completed 90 minutes which should help our rhythm in attack. Also, our left-back Collins is back, so we have a fit again squad,” Rohr stated during his postmatch interaction with the media.

Rohr also defends his selection for the game despite that some of the newcomers failed to make good impact in the game.

“It’s normal to change the team when one has already qualified. I wanted to rest the team and give others the opportunity to play. It is not a shame to lose against them because they were the first to qualify for this competition in October last year,” Rohr said.

The German tactician admits that Madagascar performed better than the Super Eagles in the game.

“Madagascar were the better team, but the first goal was a wonderful gift to them. I wanted to see other players which was why I made five changes, and that was perhaps why we were dominated by Madagascar. We have to work hard for the next match because that is more important.

“We misplaced simple passes and were poor perhaps because subconsciously we already were thinking about the next round. We have to do better in our next game.”