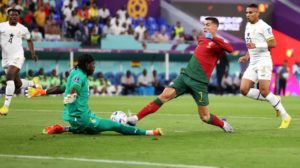 Following a goaless first half draw, Portugal were awarded controversial kind of penalty in the 67th minutes which was converted by Cristiano Ronaldo.

Reacting to the penalty, coach of Otto Addo insisted Thursday that the spot-kick from which Cristiano Ronaldo's netted in his fifth World Cup was a "gift" following the Black Stars' defeat to Portugal.

Ghana went on to lose 3-2 following further goals from Joao Felix and rising star Rafael Leao, but asked who most contributed to his side's defeat, Addo said: "the referee."

"We are very disappointed, especially when I see the penalty situation. Up to that point we really had a good match," said Addo.

"I think it was a really wrong decision, we were playing the ball... I don't know why VAR didn't come up, there is no explanation. Then it's difficult against a world class team when they're leading.

"If somebody scores a goal then congrats, but it was really a gift.... a special gift from the referee."

Despite falling 3 goals to 1 behind at some points, the Ghanaian could have gotten a point from the game but a closing stage slip in front of goal by  Iniaki Williams handed the West African their first defeat.

The Black Star will look to put their campaign back on track when they tackle South Korea on Monday.