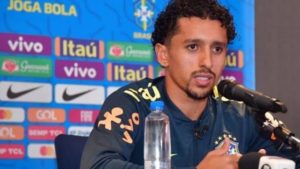 Ahead of Nigeria against Brazil friendly game in Singapore, PSG Brazilian defender Marquinhos has warned his teammates to put an eye on Nigeria forward Victor Osimhen

Osimhen plays for Ligue 1 side Lille, same league as Marquinhos and the Brazilian is well aware of the threat the pacy forward who has six goals this season carries particularly if he is given space in the box.

Expected to make the starting lineup for the game, Marquinhos could find himself up against Osimhen if the 20 year old starts as expected for the Super Eagles of Nigeria.

Speaking from the training camp of the Brazilian team, the PSG defender said it’s clear to see the threat the forward carries base on how he has settled down to life in the Ligue 1.

” Nigeria have very physical and skillful players. Osimhen has done well at Lille. Virtually unknown before his transfer but now everyone knows him that shows he can be very dangerous. We have to put an eye on him”, he said.