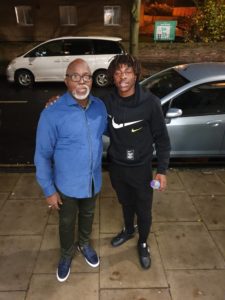 Before Super Eagles clash against Benin, a reporter asked Gernot Rohr about Pinnick’s comment on a new deal, saying the German’s contract renewal depends on his plans for NPFL players.

“The NFF would start discussing with Rohr on the renewal of his contract by January.. if he agrees with the clauses, terms and conditions in his contract, the federation will give him a new contract before his current deal expires next year”.

“We will talk about his refusal to pick home-based players because the domestic players need to play for his national team to gain recognition. That way, he can be seen by good foreign

This does not mean that we will impose any player on the coach. If the coach finds any player worthy to play for the Super Eagles in the NPFL, he should use the player.”

These were the words of the NFF President when asked about Gernot Rohr’s contract situation. While it is not a bad thing to see him fighting for NPFL representation in Super Eagles squad, it was hypocritical of him to visit QPR’s Ebere Eze to switch international allegiance to Nigeria.

The 20-year-old has represented England at the U-21 level, but he is eligible to play for the Super Eagles through his parents. Much of the Super Eagles success in recent years has been down to players of dual nationality committing their futures to Nigeria.

But judging from Pinnick’s comments about Rohr’s contract renewal, it shows he is not in support of Rohr’s reliance on foreign players.

This reeks of hypocrisy, and it does not portray the Delta born official in a good light. You can’t criticise a manager for snubbing local players in favour of foreign pro, but also at the same time try to convince another foreign pro player to play for Nigeria.

Probably there’s something Pinnick is not telling the public in regards to Rohr’s contract renewal. Recently, the former Bordeaux manager revealed some of the problems he has encountered with the Federation.

“While I have had a good time with my players and staff over the last three years, I have to say that relations with the administration have not been very easy, especially when it comes to the payment of my wages and that of the bonuses and allowances of my players and staff. There needs to be a lot more respect in this regard, Rohr said.

Could this be the reason for Pinnick’s hypocrisy? The 46-year-old possibly felt Rohr’s public outcry of his situation with the federation does not do NFF’s reputation any good- so decided to play the “local players” card.

Aside from the fact that it is hypocritical, Pinnick going ahead to meet Eze does not paint a good image of him. Why is the country’s number one football man going out to convince a player to switch international allegiance? Why can’t he send representatives? Why do they have to reveal the details of the meeting to the public when the youngster has yet to make a decision?

A similar scenario happened with Tammy Abraham who was visited by Pinnick but eventually ended up choosing England over Nigeria. Shouldn’t that serve as a lesson to Pinnick’s led board?

Details of meetings like this are kept secret until it is certain the player has decided to switch allegiance. Should Eze decide to stick with England, then Pinnick and NFF would have made a mockery of themselves once again.

Nevertheless, it is time for Pinnick to sort out Rohr’s contract issue, and let the German tactician do his job without any interference from the NFF board.